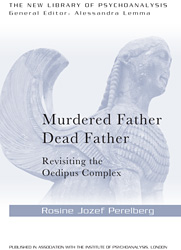 
In this book  the elaboration of the distinction between the murdered (narcissistic) father and the dead father is seen as providing a paradigm to the understanding of different types of psychopathologies, as well as works of literature, anthropology and historical events. The book includes a reflection on how the concepts of the death instinct and the negative, in their connection with that which is at the limits of representatbility, are an aid to an understanding of Auschwitz, a moment of  rupture in European culture, that the author characterizes as “ the murder of the dead father”.

Perelberg’s book is an important clinical and intellectual  marker, and should be  required reading for psychoanalysts, psychotherapists, anthropologists, and historians, as well as students in all these disciplines.

“Perelberg has produced a book of the greatest topical importance to anyone involved in psychoanalysis. The review of the literature is by far the best on the subject. The various chapters of this most skilfully edited book are beautifully written, and lay the foundations for a psychoanalytic theory of violence and suicide. They also make an important contribution to a theory of technique that understands symptoms as solutions to conflicts …. It should be a standard reading for many years to come.”

“The clinical material is detailed, vivid, and convincing; The theoretical discussion is wide and the result is a book of great interest to anyone involved in psychoanalysis.”

“This book is a joy to read, human and theoretically stimulating…The subject is urgently topical…Perelberg has grasped a mammoth task. She has done it magnificently. She shows a real talent for abstract thought…It is a marvellous read which could be a standard work for many years…”

Reviewer for the New Library of Psychoanalysis

This book is a collection of clinical papers on the treatment of patients who have acted violently against others or, in attempting to end their own lives, have acted violently against themselves. Although psychoanalysts have studied and written about suicide, this is one of the comparatively few books that contribute to the psychoanalytic literature on the treatment of violence. In doing so it re-visits known ideas and presents some original insights on the theories one can construe about borderline patients who act-out violently. Repeatedly, it is made clear that this is about actual physical violence (or its threat) in or out of the clinical situation. All but one of the authors of the individual chapters belong to the Young Adults Research Group at the Anna Freud Centre, and some of these papers were presented at a conference organised by University College London in 1997.

The editor, a training analyst of the British Psychoanalytical Society, begins with a comprehensive review on the literature relevant to the subject and this provides an excellent starting point for anyone wishing to look further and in detail into particular aspects of the main theme of the book. Aggression and the controversies that surround the understanding of its nature, origins, and manifestations are looked into from different and various perspectives. She also introduces each of the chapters and weaves a unifying thread in such a way that one can get a sense of coherence to the collection despite the different clinical style and thinking of each of its contributors.

Each chapter discusses clinical material in a clear and vivid way and does not for a moment fail to convey what it was for each of the analysts to be in the room with their patient and the difficulties they encountered. The clinical material discussed illustrate the main three themes that the authors agree on and put forward as features that are present in their work with violent and suicidal patients.

The first is the idea that, in common with most borderline patients, there is a failure to mentalise the self’s own or the object’s mental states. That is to internalise a function that will enable the subject to deal with mental states (needs, desires, sensations etc.). This function needs to be developed from an early age and in the relationship with the maternal object when the child seeks in his primary object the possibility of getting a representation of his own states of mind. One of the relevant consequences of the failure in the development of this function is that it may leave the child with only the possibility of experiencing his states of mind as body states and processes that need to be evacuated (discharged). This formulation may offer a particular explanation for why the violent response and not other may be the recourse of some borderline patients. For instance, in the words of one of Fonagy and Target’s patients: “If I kill you, I won’t have to think about what you think”  (page 55). The violent act thus becomes an attempt “to attack thoughts in oneself or the other”  (ibid.).  All the authors to a large extent seem to coincide in thinking that the violent act, be it against an external or internal object (as in the case of attempted suicide) is a fragile, desperate attempt to maintain a certain degree of [precarious] life in the self and it offers a delusional sense of safety.

One of the corollaries of the failure to mentalise is that it institutes a particular kind of internal object relationship –more specifically with the maternal object- that is typified, alternatively, by a fear of engulfment or abandonment. Most of the authors use Glasser’s “core complex” to describe the nature of these ties. If the patient is understood he may feel engulfed and if not understood he may feel abandoned, rejected or criticised, mirroring in that way the characteristics of their earlier experience of their ties to the maternal object. A sado-masochistic object relationship (usually between ego and superego) gets established to ‘modulate’ between these two extreme sets of experiences.

All the authors coincide in saying that the problems that arise from the core complex (and this would be second main unifying theme of the book)  call for the presence of the paternal figure as one that will either serve as an alternative or draw the child away from a traumatising situation. The role of the father (the ‘third’) in the case of these patients becomes crucial. The authors coincide in illustrating how there have been serious problems with the father’s ‘presence’. In the treatment situation, this presents particular problems. The possibility of finding a third position from where to be able to reflect on what is going on with the patient becomes very difficult as the patient will tend to draw the analyst into a “safe” sado-masochistic exchange that masks the patient’s predicament. The clearest example can be found in Campbell’s paper on the pre-suicide state. In this chapter he explores ‘post hoc’ the way in which a subtle enactment took place. He shows how, as analytic work on the maternal transference gave way to the paternal transference, the actual experience of paternal withdrawal was enacted with sad consequences. Bateman’s paper, discussing Rosenfeld’s ideas on narcissistic states, offers a vivid description of a borderline patient who moves between using thick- or thin- skinned narcissistic defences and he describes their relationship to violent attack and suicide respectively. He also describes some of the difficult issues of management that arise in the treatment of these patients.

The third main idea, described by the Perelberg herself, as central to patients prone to acts of violence, is the existence of a core phantasy that conceives the primal scene as one where there is no father but mother and patient engaged in a violent intercourse. I felt that this idea although clearly a feature of the patients she describes was perhaps less obviously present in the discussion of the clinical material of the other patients. In mentally reviewing my experience of seeing patients who have committed serious violent acts (against others) in one or twice weekly psychotherapeutic treatment at the Portman Clinic the notion that the editor describes of there being a core phantasy of a violent, fatherless, primal scene is relevant, although I have not found it central.  I suspect however, that this may be so because exploring the centrality of this kind of unconscious phantasy has been possible as the patients described in this volume have all been seen in five times a week psychoanalysis, a privilege this reviewer has not had.

In having done the injustice of schematising the three main ideas of this book encountered by this reader I hope I have conveyed that this book constitutes an important contribution to the understanding of those patients that engage in violent acts. I felt the need for further elucidation on the difference between an actual suicidal act and a violent attack against another. The book offers a contribution for all those that are engaged in clinical work with violent and suicidal patients. As a bonus, most of the patients described in this book are young adults and in the clinical descriptions one can perceive those specific developmental aspects of the transition from adolescence to adulthood that bear an influence on this kind of psychopathology. However the ideas presented can be of great value to anyone working with these often worrying, if not frightening, individuals