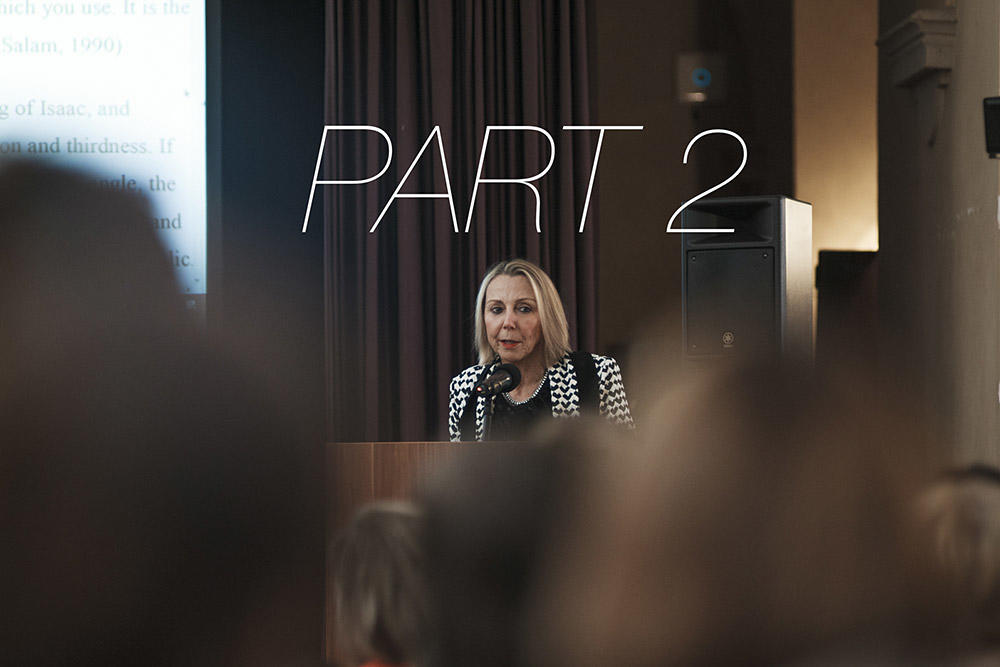 During the Otto Fenichel and His Legacy Conference in Prague in October 2017, we had a chance to meet some of the most prominent contemporary psychoanalyst. One of them was Rosine Perelberg, who kindly agreed to answer some of our questions about society, culture and of course psychoanalysis. In second part of our interview, dr. Rosine Perelberg answers the question of most important contemporary concepts in psychoanalysis with the help of glossary from her most recent book. The work of Gregorio Kohon, Andreé Green, Jacqueline Godfrind and others is reviewed. Rosine Perelberg uses her own insight into the psychoanalytic theory to bring us readable and useful overview of the latest developments in the psychoanalytic world.

First part of our interview was published  here.

First part of the interview

What contemporary psychoanalytic concepts developed in the last 10 years do you see as the most important?

Many of the definitions are again taken from the glossary in my book: Perelberg, R.J. (2015) Murdered Father, Dead Father: revisiting the Oedipus complex.

I have selected concepts that have illuminated my thinking: Après-coup (descriptive and dynamic); crypt; the phantasy of “a father is being beaten”; the distinction between the murdered father and the dead father; the work of the negative; Oedipus 1 and 2; passivation; symbolic impoverishment; commonality of experience between the aesthetic and the psychoanalytic experience.

I define them below:

Après-coup (descriptive and dynamic) (Rosine Perelberg): I have suggested a differentiation between the notions of descriptive après-coup and dynamic après coup. Descriptive après-coup as used in colloquial psychoanalysis simply means retrospective signification. Dynamic après coup, on the other hand, includes various notions of temporality, such as fixation, regression, repetition compulsion and the return of the repressed. These different notions of time refer to the heterochrony in psychoanalysis (Green). Furthermore, dynamic après-coup is connected to a network of concepts such as trauma, castration and infantile sexuality, giving a specific meaning to the whole body of Freud’s theory. It is the linkage of après-coup to this network of concepts that gives it a metapsychological dimension. It is the temporality of après coup, establishing the links between the here and now and there and then, that marks the passage from a dyadic to a triadic structure in an analysis.

In art and literature, the view er or reader is confronted by an emotional disruption provoked by the object, threatening the natural distinctions by which we normally live. There are different and multiple meanings contained in the artistic and the literary object, which create a crucial dimension of uncertainty, evoking in us a mixture of past and present experiences. This generates elements of irrationality which probe and challenge the rational efforts of our perceptions.

Kohon, G. (2016). Reflections on the Aesthetic Experience: Psychoanalysis and the Uncanny. London: Routledge.

Crypt (Jacqueline Godfrind). According to Jacqueline Godfrind, the crypt contains the part of the relation with the mother that constitutes a “black pact”. “Behind the sometimes deadly hate that exists between daughter and mother, suddenly there appears a bewildered love for the mother, a fascination that rivets the daughter to the mother, appealing to an encounter ‘de trou à trou’ – ‘hole to hole’ – the daughter being totally attached to the mother, bewitched, a link I call ‘primary homosexuality’” (Godfrind, chapter 5, this volume).

Enigmatic Signifiers. (Jean Laplanche) Laplanche developed a theory of generalized seduction whereby “an adult proffers to a child verbal, non-verbal and even behavioural signifiers which are pregnant with unconscious sexual significations” . What makes the message into an enigma is connected with the dimensions that the messages are unconscious to the emitting adult themselves.

Perelberg, R. J. (2011a). A Father Is Being Beaten: Constructions in the Analysis of Some Male Patients. International Journal of Psychoanalysis, 92: 97–116.

Father, dead: Perelberg indicates that this is the father of the law that prohibits all killings. In Totem and Taboo Freud situated the murder of the narcissistic father as leading to the creation of the law and genealogy (Freud, 1912–13). The dead father became more powerful than he had ever been when alive: he becomes the symbolic, dead father that prohibits violence and incest and is at the foundation of culture.

Father, murdered: Perelberg refers to the narcissistic father is murdered by the sons in the founding myth of Totem and Taboo. The murdered father does not have a place in the symbolic, oedipal configuration. One can identify clinical configurations where the “murdered” father is present, such as in the anal–sadistic, perverse structures described by Abraham and Chasseguet-Smirgel. In such configurations the individual finds it difficult, if not impossible, to make sense of the role of the father in the primal scene. This does not mean that the father has actually been murdered; the clinical picture may appear as the exclusion of the father from the primal scene. These patients tend to establish dyadic relationships and eliminate triadic configurations.

Father, narcissistic: This is the father described in Totem and Taboo (1912–13) who is allpowerful, who possesses all the women and exercises tyrannical domination in relation to his sons. It is this violent and incestuous father who is killed in the founding myth. One is referring to the imago of the narcissistic father that exists before the prohibition of all killings.

Negative, work of (Andre Green): The notion of the negative was developed by André Green in order to account for both normal and pathological processes. The negative is the very condition for the existence of the psychic apparatus and its development. Repression establishes the distinctions between the unconscious and the preconscious–conscious. The unconscious is defined as the negative of the conscious, in terms of the absence of time and disregard of the categories of contraries and contradictions. Green suggests the concept of a “framing structure” as being at the origins of representation. When holding her infant, the mother leaves the impression of her arms on the child, which constitutes the framing structure that, in her absence, contains the loss of the perception of the maternal object as a negative hallucination of it. Green believes that it is against the background of negativity that future representations of the object are inscribed. The negative hallucination of the mother and of the mother’s body creates the conditions that allow the activity of thinking itself, as well as the capacity to symbolize. The negative hallucination of the mother is, therefore, a precondition for thought.

Green’s formulations on the work of the negative also include the notion of mental structures where representations have disappeared, leaving only a black hole in the psyche, blank spaces without representation.

Oedipus 1 and 2. (Julia Kristeva) Kristeva suggests a two-sided Oedipus phase for the girl: “Oedipus 1” relates to both boys and girls, where the desire for the mother is dominant, before there is a change of the object for the girl towards the father: “Masturbation, incestuous desire for the mother: here is the first aspect of the Oedipus complex (I will call it Oedipus 1) that structurally defines the girl, as well as the boy, before she arrives at Oedipus 2, which causes her to change objects (the father instead of the mother). Yet, starting with this structuring (Oedipus 1), there are differences between the girl’s phallicism and the boy’s.”

Passivation is a term coined by André Green that refers to patients’ capacity to entrust themselves to analytic care. He interprets Freud’s concept of the “repudiation of femininity” as the repudiation of the mother’s passivating action, her seductive care, rendering the infant passive. This also refers to the individual’s passivity in the face of the drives.

Symbolic impoverishment (Gregorio Kohon) It indicates a deficit in the process of symbolisation; if malignant, although not conscious or wilful, it represents the subject’s misunderstanding of the issues under consideration. The subject appears to have suffered an early, primary failure in the process of representation: concepts, ideas, fantasies, tentative impressions, hypotheses, make-believe and speculative thoughts can only be understood in terms of concrete actions.

There is a conspicuous externalisation of experience: the subjects do not feel that they own their actions, and this is frequently accompanied by unconvincing rationalisations. Since the experience remains external to their subjectivity, events happen to them but they remain observers, not active participants. Experiences, instead of being felt and somehow understood, are kept outside; there is no expulsion and discharge as such, no projection; experiences were not registered in the first place; in other words, symbolic impoverishment is not the result of repression. The subject is unaware of these processes, living in a state of mind potentially similar to alienation, where all sense of purpose is obscured, and meaning is lost.

The capacity to symbolize may have become impoverished in early life, when the original experience of primitive anxieties became too persecutory; in all probability, no parental figures were emotionally present to help the baby contain them. If, at an early stage, primitive anxieties were repeatedly disallowed, ignored, and negated by the parental figures, or affected by their absence, integration of the ego’s structure would have not have developed satisfactorily; thus, attacks on linking would have disrupted and thwarted intellectual progress. Symbols were formed but the emotional capacity to interpret them would have been inhibited and not allowed to develop.

Kohon, G. (2000). Dreams, symbolic impoverishment and the question of the other. Dreaming and thinking, 73-90. London: Carnac